The “crown jewel” of European fintech, with market capitalisation of over €12 billion has thrown in the towel with an insolvency declaration. In just eight days, the German electronic payment company Wirecard folded. The financial collapse came with the admission that 1.9 billion on the balance sheet “probably do not exist.” Then came the arrest of CEO Markus Braun and the inevitable flight of investors. This “Parmalat Case” with a Teutonic flavour also left a bad taste in Italy, with hundreds of thousands of prepaid cards temporary blocked.

SisalPay, for example, relied on Wirecard, serving 325,000 Italian customers whose funds were frozen overnight. SisalPay announced in a memo that “despite the total absence of liability,” it would bear the financial burden directly and immediately returned the frozen sums of money “to protect its customers’ interests.” The initiative provides for an economic hedging plan worth over €20 million. The financial domino effect also hit Soldo, an Italian fintech that uses the German company’s prepaid cards, dragging 16,000 disadvantaged Milanese families along with the fall. The Municipality of Milan relied on Soldo, among others, for disbursement of Covid-19 emergency spending bonuses.

While the Wirecard’s bad bet was ultimately due to a gigantic accounting scandal, the German story held a long series of operations with opaque outlines. It involved clients skirting the laws and offshore banking middlemen willing to cloud the money trail.

But the German company and Walpay were playing from the same deck. At the centre was a man linked with all of Wirecard’s most controversial affairs: from acquisitions in India paid at ten times their value, to Asian “customers” with whom the German company declared fictitious business. He is James Henry O’Sullivan, an English businessman based in the Principality of Monaco, who pulls the strings of shell companies with key roles in the Wirecard scandal.

Thanks to a data leak from Cayman National Bank obtained by Ddos activists, Irpimedia tracked down the new bank account, one of the first pieces of this puzzle. An internal bank memorandum declares its purpose of facilitating Walpay transactions for its new business partner, Wirecard. “Once this new account is up and running there is likely to be one bulk payment every Thursday from Wirecard, and then send about thirty or so regular payments to merchants partners every Friday,” the document says. 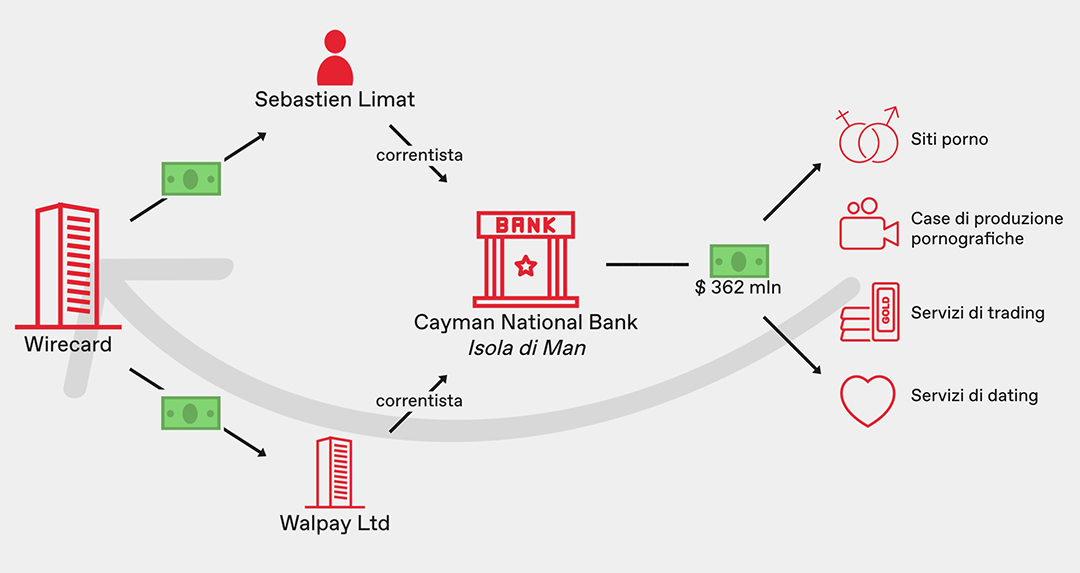 Med-Or, the Leonardo’s foundation behind the Italian hidden diplomacy

Former minister Marco Minniti chairs the foundation sponsored by Leonardo. It is at the centre of an informal diplomatic network that helps the company extend its relationships

“One thinks the transactions would have just run through Wirecard if they were genuinely legal and compliant,” Fraser Perring tells Irpimedia. He is an analyst at Viceroy Research and one of the first short sellers to ask questions about Wirecard. “While investigating Wirecard for over four years I began to realise this was either for potential illegal activity and/or to obscure high-risk payments.”
In December 2014, Walpay was forced to throw in its hand and leave the Isle of Man. According to an internal memorandum of the local supervisory authority, their staff was insufficient to meet compliance obligations. Walpay moved to Luxembourg, calling itself Hesperus, the first in a series of name changes to follow.

The agreement with Wirecard, rather than disappearing, evolved. Behind the transactions flowing back and forth between Wirecard and its clients was a French lawyer practising in Luxembourg. Sebastien Limat entered the scene at the end of January 2015, opening what appeared to be a personal account at Cayman National Bank. He gave as a correspondence address that of a taxi service operated by Limat’s family in a small town near Thionville, on the border with the Grand Duchy. A few days later, Wirecard sent 5.5 million dollars to that account, to then be paid to the usual group of merchants.

Clicca qui
The activity continued undisturbed for several months until, in November 2015, the first alarm bells went off. JPMorgan, the American business bank used in this case to execute dollar transactions, began asking questions about the legality of the transactions. JPMorgan does not deal directly with Cayman National Bank, but with a leading British institution, National Westminster Bank (NatWest), used by the Isle of Man institution as a “correspondent bank” in the United Kingdom.
Correspondence between the two banks states that JPMorgan wanted to understand “the logical basis” behind the transactions that NatWest processed in favour of Sebastien Limat, asking for an accounting of the funds’ purposes and real recipients. At first, NatWest replied that the activities carried out were legal and that the customer (Limat) was a reliable individual.

But a few months later, the American business bank seemed to increase the pressure and NatWest reconsidered its position. In April 2016, the Royal Bank of Scotland (RBS), of which NatWest is a subsidiary, sent a formal notice letter to CNB. “After a review, RBS has decided not to facilitate any future transactions involving Sebastien Limat’s account,” as stated in the document prepared by the Financial Crimes Compliance Unit. At that point, $362 million had already passed through the French lawyer’s account.

The activity continued undisturbed for several months until, in November 2015, the first alarm bells went off. JPMorgan, the American business bank used in this case to execute dollar transactions, began asking questions about the legality of the transactions

The executives of the old Walpay and lawyer Limat were left with no choice. They closed the Cayman Bank account on the Isle of Man “dedicated” to Wirecard and asked to transfer the funds to a Luxembourg account. It was held by Senjo Payments Europe, in turn owned by Caireen holding company, once again controlled by British businessman James Henry O’Sullivan. Shortly thereafter, its name and owner changed again. Renamed first Minerva Management Services and finally TmgPay, by the end of 2016, this company’s control package would end up in the hands of British citizen Aloysius Madu, a resident of Italy for years.

Madu’s name and Italian contact details appear in a series of companies in Luxembourg and Great Britain that seem to share the same business: management of online payments. The same business as Wirecard and Walpay. Mr. Madu, who is now 61, is another shadowy figure in this story. The only information about him takes us to his positions in bankrupt or liquidated companies and to Arcade, a village of few thousand inhabitants in the province of Treviso where he resides. Among the few who remember him, nobody seems to have seen him in the last two years.

O’Sullivan’s name, on the other hand, is fresh in the minds of those who have claimed for years that Wirecard is a house of cards. In fact, he seems to have played a leading role in one of the key issues in the Wirecard scandal, the acquisition of the online payments division of GI Retail, an Indian holding company.

Wirecard bought GI Retail for 340 million euros a few weeks after the latter had passed into the hands of a mysterious broker based in Mauritius, Emerging Markets Investment Fund 1A, for only 37 million euros. According to those who sifted through Wirecard’s activities, such a commercially insane operation must have had the precise purpose of artificially inflating Wirecard’s turnover.

O’Sullivan would have allegedly pulled the strings in this operation, according to Gabriele Grego, manager and founder of the US Quintessential fund, which, since 2015 has tried to shed light on the dark areas of German society. “O’Sullivan,” explains Grego, “seems to be the ultimate beneficiary of the Emif 1A fund. Wirecard denied that it was aware of the final beneficiary, even though it made a payment of almost EUR 400 million to him. This unbelievable circumstance violates Kyc (Know your customer) and anti-money laundering legislation.”

The only information about him takes us to his positions in bankrupt or liquidated companies and to Arcade, a village of few thousand inhabitants in the province of Treviso where he resides. Among the few who remember him, nobody seems to have seen him in the last two years

Coincidentally, we find in Wirecard’s history, among other things, a company called Senjo. It is in Singapore and not Luxembourg, and again Grego explains the role it played in the Wirecard affair: “Senjo was one of Wirecard’s ‘partners’. Wirecard claimed that its partners were helping it operate in jurisdictions where it had no licenses. In reality, Senjo Group (but also Al Alam and Pay Easy) included front and shell companies controlled by Wirecard and used to impute false turnover to fictitious customers.” Senjo Group Singapore has always denied having any relationship with Senjo Europe.

Comtacted by Irpimedia, Limat declined to answer questions. He could have explained why Wirecard used Walpay and why Walpay used an offshore bank account in his name to pay out hundreds of millions of dollars. And maybe he could have shed some light on the financial collapse of the late “crown jewel” of European fintech.